I’ve been in my feelings, lately.  The case about Bill Cosby has me feeling some kind of way.  Not because it’s Bill Cosby and not because of the allegations against him.  I’d feel the same way if it were anyone else.  Seeing and hearing, this story, almost everyday have begun to scrape at the edges of old wounds that I thought were forever covered, sealed and healed.

I was raped, in college.

It would be eight months before I was able to tell anyone about what happened.  I believe my roommate knew that something had happened to me, but she never said anything to me.  She was, however, more protective and inserted herself, in my life, in ways she had never done before.  At the time, I wish she would have left me alone, but later I was grateful.  Instantly, I became withdrawn, but somehow managed to put on a facade so I wouldn’t get questions, from people.  I kept going to class because I wanted to keep with my normal routine.  I knew not going to class, not meeting my friends on the quad or at the Union would cause questions.  Questions I was not ready to face or answer.  Outside of going to class, I stayed in my room, in bed.  That semester I received 1 C, 3 Ds and 2 Fs.  The next semester I received 1 D and 4 Fs.  Since my friends couldn’t see my grades I could remain hidden and not have to talk about the reason behind my grades.  I had planned to do the same with my mom until a letter, that I was being placed on academic probation went to my permanent address instead of my campus address.  I don’t even remember what I said to my mom about my grades, but I managed to put together some bullshit story that explained my grades.  It would take another six months before I told my mom the truth.

The spring semester, that led to me being placed on academic probation, I was in my Human Sexuality class not paying attention, as usual, when the new subject made a freezing chill run through me.  “What is rape?,” is what I remember my TA saying.  I listened as students shouted out answers and engaged in a dialogue about rape.  “Cheney are you ok?” Again I could hear her say, in a faint voice, “Cheney are you ok?” I couldn’t move.  Everything in me wanted to get out of that classroom.  I sat in confusion, sweating, as I watched my body run out of the classroom, but looked down and could see myself still sitting, in my desk.  I don’t know how much time had passed but eventually I was able to run, out of the classroom and my TA ran after me.  “Were you raped?” she asked me as I sat crying uncontrollably, in the hallway.  “Yes and I don’t want to talk about it.”

At that time I didn’t know that my TA was worked at the Rape Crisis Center.  After I was placed on academic probation, she suggested that I petition, to my college, that my grades for the spring and previous fall semesters be withdrawn from my academic record (basically it would show on my transcripts as if I’d withdrawn from my classes and the grades wouldn’t affect my cumulative gpa and as a result removed me from probation) because of the affect being rape had on me.  I put together my petition and was scheduled to meet with the Dean of my college.  I sat across from this man and relived what had been the worse day, of my life.  For hours he and another Assistant Dean (also a man) asked me questions, read through my petition and then sat across from me and said,”Although you were sexually assaulted, we’ve made the decision that this incident isn’t serious enough to approve your petition of withdrawing your grades.  You never told anyone and we don’t feel you were affected…….”  At some point I just stopped listening.  They gave me a letter with their decision and I walked out.  My TA was waiting in the hallway, she looked at me and knew what decision the Dean had made.  I looked at her, trying to hold back my tears, “What’s the point of reporting rape if no one will believe you anyway?”  It wasn’t the decision to deny my petition to withdraw my grades that had me angry.  I was disappointed and hurt that the Dean of a major university, where rapes happens, downplayed the seriousness of the affects rape would have on a student.  He had no sympathy, no empathy and no compassion.  That is what made me upset.

My rapist was a student athlete.  I knew that coming forward would be more about me and what I did to cause my rape, than it would ever be about him and his crime of raping me.  I get sick, physically, when I hear people defend the actions of a rapist by bringing up the length of time it took the victim to come forward or what was the victim wearing or doing or the victim’s delayed (or prolonged) reaction of emotion to being raped.  I never reported my rape, to law enforcement.  I wasn’t strong enough, I didn’t have the energy, I was numb and I was embarrassed.  Embarrassed because I had let myself become a victim of rape.

Before I could give up, I started receiving counseling at the rape crisis center and with a therapist, on campus.  One day when I was going to meet with my TA, I walked into the room and there were four women that would become my strength and help me find my voice as I moved beyond my rape and took on  the University of Illinois, in another petition to withdraw my grades.  My TA, the Director of the Rape Crisis Center, a female Dean (from another college) and my therapist offered me the support I needed.  My second petition, to the same Dean, was approved.  I continued with therapy but still felt exposed and vulnerable.  I just didn’t feel safe.  I left school and went back to Chicago.  After a year, I returned to Urbana and stayed another two and half years before graduating with my bachelor’s degree.

Everyday, I make a conscious effort to remove myself from the discussion regarding Bill Cosby.  It opens up old wounds and even though I’ve received counseling, when I think about my ordeal, I still become numb and emotional.  I know the pain of being raped.  I know the frustration of dealing with the decision of reporting or not reporting what happened to you.  I know the feeling of shame from judgmental stares and whispers (I remember the 2 male deans passing notes back and forth while I was talking.  They may or may not have been talking about me, but I BELIEVED they were talking about me).  It’s been 20 years and I still remember EVERY detail of my rape.  So the idea that women can’t (or don’t) remember what happened because many years have passed, is false.  I remember my mom’s cries, on the other end of the phone, when I finally told her I was raped.  I still remember my god-sister squeezing my hand, when I told her.  She didn’t say anything, but I recognized the look of support when I looked into her eyes.

I can’t watch movies or TV programs that show the image of women being raped, without feeling some type of way.  That’s why as much as I wanted to see Andre 3000 and Regina King, this season I won’t watch American Crime Story.  The story will center around a young male student being raped, but it’s still rape.  Sometimes I question why this happened to me, but I never question those that I’m able to support as they begin the healing process.  We live in a society where rape is under reported because of the stigma placed on women who are raped.  I work hard to keep my emotions, in check, but sometimes I cry as these women cry.   I understand, all to well, the hesitation in reporting rape, so I applaud their courage.  I hope they look at me and listen to me and realize that they can and will be better. 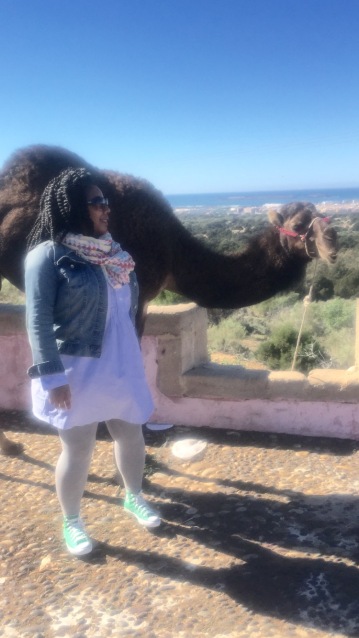